How to NOT Use Your Ceiling Fans 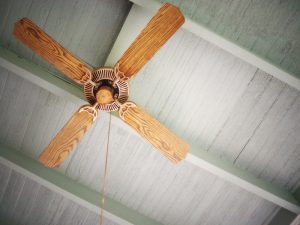 Ceiling fans don’t seem like that complicated of an appliance right? When you want your home to be cool, you turn your ceiling fans on, and that’s that, right?

Well, what many homeowners don’t realize about ceiling fans is that they actually do not “cool” the air in the room of which they’re running—that is, they do nothing to lower the temperature. Therefore, leaving your ceiling fans on in the home all day even if you aren’t home is exactly how not to use them.

So then, you might be wondering now, is there any point to using ceiling fans at all? Of course! However, there are optimal ways to utilize this appliance, and then wasteful ways to use it, too.

As we mentioned, ceiling fans do not actually lower the temperature of the air in the rooms where they’re installed. Instead, they move air. Basically, they do create a cool breeze, which feels even cooler when you have the air conditioner running too—in fact, ceiling fans help with HVAC efficiency, which we’ll get to in a moment.

Running your ceiling fans all day though, when nobody is in the home, can be more wasteful than it is helpful. Since it’s doing nothing to actually lower the temperature, you’re running an electric device for basically no reason. While ceiling fans do not eat up a significant amount of energy (which is why they’re so beneficial), they do still contribute to the cost of electricity.

Plus, running the motor of your ceiling fan could actually add heat to the room. Imagine you aren’t home throughout the day, and you have no AC running, but your ceiling fan is on the whole time. Sure, you might feel a cool breeze when you walk into the room, but overall you may have contributed to an increase in the room’s temperature, and therefore your AC will now have to run longer to cool the room back down.

The Hidden Power of Ceiling Fans

None of this is to say that ceiling fans are pointless, they’re actually very advantageous! No, they don’t decrease the temperature of the room they’re in, however they do circulate the cooled air coming from your AC vents, allowing you to turn the temperature up by several degrees. This ultimately saves you a significant amount of money off your electrical bills, as a result.

Ceiling fans are versatile. They can be put in any area of your home from bedrooms and kitchens to screened-in porches and patios. They’re functional and attractive looking, adding to the aesthetic appeal of your home.

And let’s not forget their wintertime benefits—your ceiling fans can be reversed in the winter with a simple flip of a switch to better distribute warm air just like it does cool air for your air conditioner. This means you have year-round comfort made even more efficient with the addition of ceiling fans.

For exceptional electrical services, including electrical repair in Hendersonville, TN, contact Covenant Heating and Cooling, where we are “Dedicated to the Promise of Serving You.”