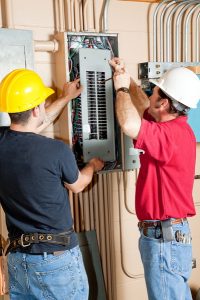 Also called the circuit breaker panel, the electrical panel of your home serves as the central hub for your entire electrical system. It’s where the incoming electricity is routed to the different circuits. The breakers are designed to shut off circuits in case of a voltage overload. If you have an aging circuit breaker panel, it’s wise to ensure you aren’t overdue for an upgrade, given the higher electrical demands we have all put on our homes in recent years.

But when is it actually time to upgrade? After all, modern circuit breakers can last a really long time—typically 25-40 years. We have provided 4 signs below that tell you it may be time.

This is pretty rare, but there still are some older homes—those built prior to 1960—that have fuse boxes in them rather than an electrical panel with circuit breakers. While in an electrical panel a breaker is tripped when there is excess voltage, a fuse is blown in a fuse box when this happens.

Circuit breaker panels are not only more convenient, since you can simply reset a breaker rather than replacing a fuse, but they’re also much safer! This is why modern homes are no longer outfitted with fuse boxes.

2.     You’ve Been in Your Home for Over 25 Years without an Electrical Upgrade

Have you been in your home for over 25 years? Other than your initial home inspection when you bought or started renting your home, has the electrical panel ever been checked? If your home still has the same breaker box than it had back then, it’s almost certain that you need a new one. Safety is a concern, sure, but more than that your electrical capacity is probably suffering.

Breaker boxes that are 2-3 decades old (or older) have the ability to handle about 60-100 amps of voltage, while newer electrical panels can handle up to 200 amps—much more suited to the increasing rise in electrical demand we’ve had in households, due to charging stations, computers, and the increase number of electronics and rechargeable devices.

3.     Your Breakers are Frequently Tripping

The last thing you probably want to be doing is making regular visits to the electrical panel during the week to reset tripped breakers. If this is occurring with only a single circuit, it’s likely a problem with whatever appliance is hooked up to it, or due to wiring issues.

You will need electrical repairs in this case—but if you notice this is happening to multiple breakers, consistently, it’s more likely that it’s time to upgrade your electrical panel. It’s likely that the panel is simply worn down and not able to meet your capacity needs any longer.

It’s probably not that you have a haunting in your home. Most often, flickering lights actually indicated small power surges in the home. These occur when a powerful appliance comes on and places a high demand on the electrical system.

In some cases, you can mitigate this by rearranging where you have certain cords plugged in to decrease demand on some circuit breakers. Typically things like your heater or central air conditioner should have its own designated circuit breaker. In most cases though, this means you need to have your electrical panel inspected, and potentially upgraded.