Power Surge Protection: Do You Know Your Risks? 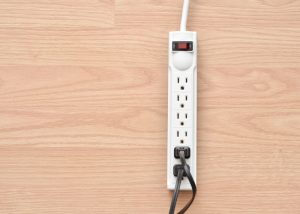 If your home is anything like the average American home, you have a lot more electrical equipment and appliances in it than ever before. You probably have multiple devices connected to your power supply and electrical grid at any given time, right? That’s great, but it’s important to know the best way to protect your appliances and power charging stations.

Power surges, also known as voltage surges or voltage spikes, can do irreversible damage to electrical components, causing you to replace them much sooner than you would have had to otherwise. Think you can avoid this because you have power strips located at all your outlets? These do offer a layer of protection, but they’re not the end-all solution—more on that below. The good news is, there is more you could do to protect your home’s electrical system and the appliances connected to it.

What Is a Power Surge, Exactly?

A power surge, or voltage spike, is when there is a sudden increase in voltage throughout your home’s electrical system. This surge is capable of melting wires, tripping circuit breakers, and causing fuses to blow. On that last note, if you still have a fuse box in place, it’s time to upgrade to a safer and more effective electrical panel!

Anyway, homeowners often think that the only cause of power surges is stormy weather and lightning strikes. This certainly does contribute to power surges, or cause some of them, but there are other sources you should be concerned with.

The thing about power surges is, they often come from inside your house. Sure, that sounds like a dramatic climax to a horror story, but it’s actually true in this case. When a powerful electrical appliance turns on, such as your air conditioner, it can cause an imbalance in the electrical current, creating a power surge. Have you ever noticed the lights in your home suddenly flicker when your refrigerator starts running? This is an instance of a power surge.

Power strips are a step in the right direction of protecting your home’s electrical system and appliances from a power surge. They’re certainly a safer alternative to older “octopus” plugs used to allow for more appliances to plug into a single outlet. Power strips contain their own circuit breaker, so if there is a power surge, the strip will ideally shut off power to prevent damage to the appliances plugged into it.

We do recommend using power strips for small scale electronics—your alarm clock, to charge your phone or laptop, etc. But power strips are just the first line of defense, and are not often enough for larger power surges. A massive spike in your home’s voltage can overcome a simple power strip, and some lesser surges won’t even cause a power strip to activate, but could still hurt the electronics plugged in.

The best way to protect your appliances and electrical system is with whole-house surge protection, installed right into your electrical panel by our professionals.

When you need a professional electrician in Hendersonville, TN, contact Covenant Heating and Cooling. “Dedicated to the Promise of Serving You!”